Making Lights and What I Learned 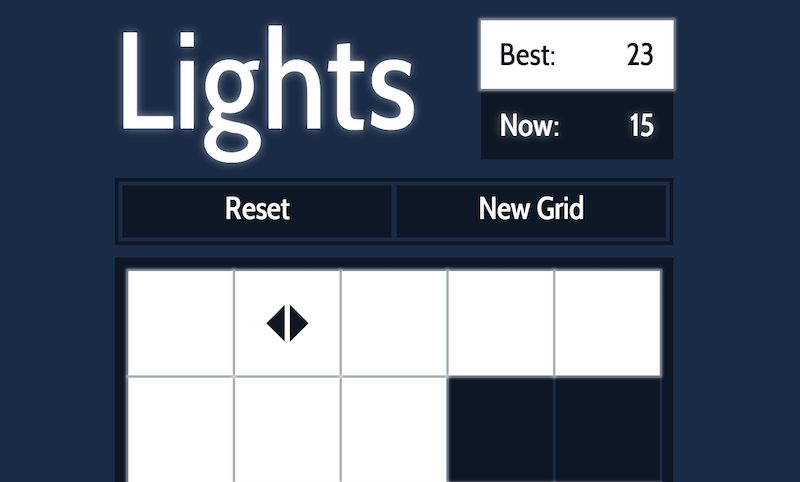 I just recently finished developing an adaptation of the classic “Lights Out” game. For those of you who aren’t familiar, the object of the game is to turn on all the lights on the grid. Whenever you toggle a light, all 4 adjacent lights would also be toggled. In my version of the game, Lights, the same rules and objective apply. However, some lights are “directed” meaning when you toggle them, only the adjacent light(s) in certain direction(s) are toggled, which increases the difficulty of the game. The game itself has some fairly interesting nuances to it. Firstly, the order in which you toggle lights doesn’t matter. Assuming you start with a board configuration A, if you toggle light 1 and then light 2, this is equivalent to toggling light 2 and then light 1. Also, somewhat obviously, tapping on the same light twice (or any even number of times) is the same as not tapping it at all. Likewise, tapping a light an odd number of times is the same as tapping it only once. What this mean is every solvable board can be solved by tapping a subset of lights only once. Pretty nifty.

I have a really bad habit of over-engineering my code. I actually started this project last May, but I didn’t get very far. I started looking at the code again about a week ago and was pretty overwhelmed. It consisted of about five different classes that did somewhat obscure things in very obscure ways. I started by pruning away almost all of the existing code, and began working in a single file. Surprisingly, this made my code more readable than when it was split up between classes. It was easy to follow the code which greatly aided debugging. I think that having everything in one place will also make it easier to maintain (to a point). I’ve always had a thing about making my code “look good” and to me, long files always failed to achieve this. However, I’m starting to see the beauty of consolidating code and replacing lots of little classes with lots of little functions.

As far as the design of the game, I’m actually pretty happy with it. One aspect that I didn’t like was the fact that I couldn’t find a way to add multi-directional arrows without cluttering the design. If you play it, you’ll notice that arrows are always either up/down or left/right. Never both. There’s nothing difficult about this from a programming standpoint, but I absolutely could not find a way to elegantly add it to the design. I’m not too upset about this, but I never really like when form gets in the way of function. Perhaps a better designer than I could come up with a solution.

The development process went fairly quickly, which is a first. I did get to play with a few things that I hadn’t before, though. For example, this was the first time I had ever used CSS3 transitions, and boy are they cool! It made the Javascript so much simpler to have all of the animations handled by CSS. I know I’m barely scratching the surface but I can see now why people have been so excited about them.

I also got to work with cookies to keep track of users’ best scores. The way Javascript handles cookies is very interesting for me. Cookies are stored in document.cookie as a “string.” I put string in quotes because there’s some sort of voodoo going on behind the scenes. Namely, when you define a cookie, it’s generally of the form name=value; expires <UTC DATE>. You then assign this value to document.cookie. But what if you want multiple cookies? Well, you do the same thing. But you only specify one at a time. So, as an example, the following snippet would store three cookies:

What gets to me is that it looks like we’re assigning to document.cookie each time, but it never gets overwritten. Furthermore, if we were to then read document.cookie, we would see

What happened to the expiration dates?! Your guess is as good as mine. What made cookies really annoying is that there doesn’t appear to be a way to test cookies using the file:/// protocol, which makes local development very difficult. (As an aside, Google Chrome supposedly has a flag to enable file cookies, but I couldn’t get it to work).

I think the biggest thing I gained from Lights was finally finishing a project and releasing it to the public. I don’t think I’ve ever done it before and it’s a really good feeling to finish something and be satisfied with it. I would deeply appreciate any feedback you may have, you can contact me on Github or via email. At the moment, my best score is 31. Can you beat me?